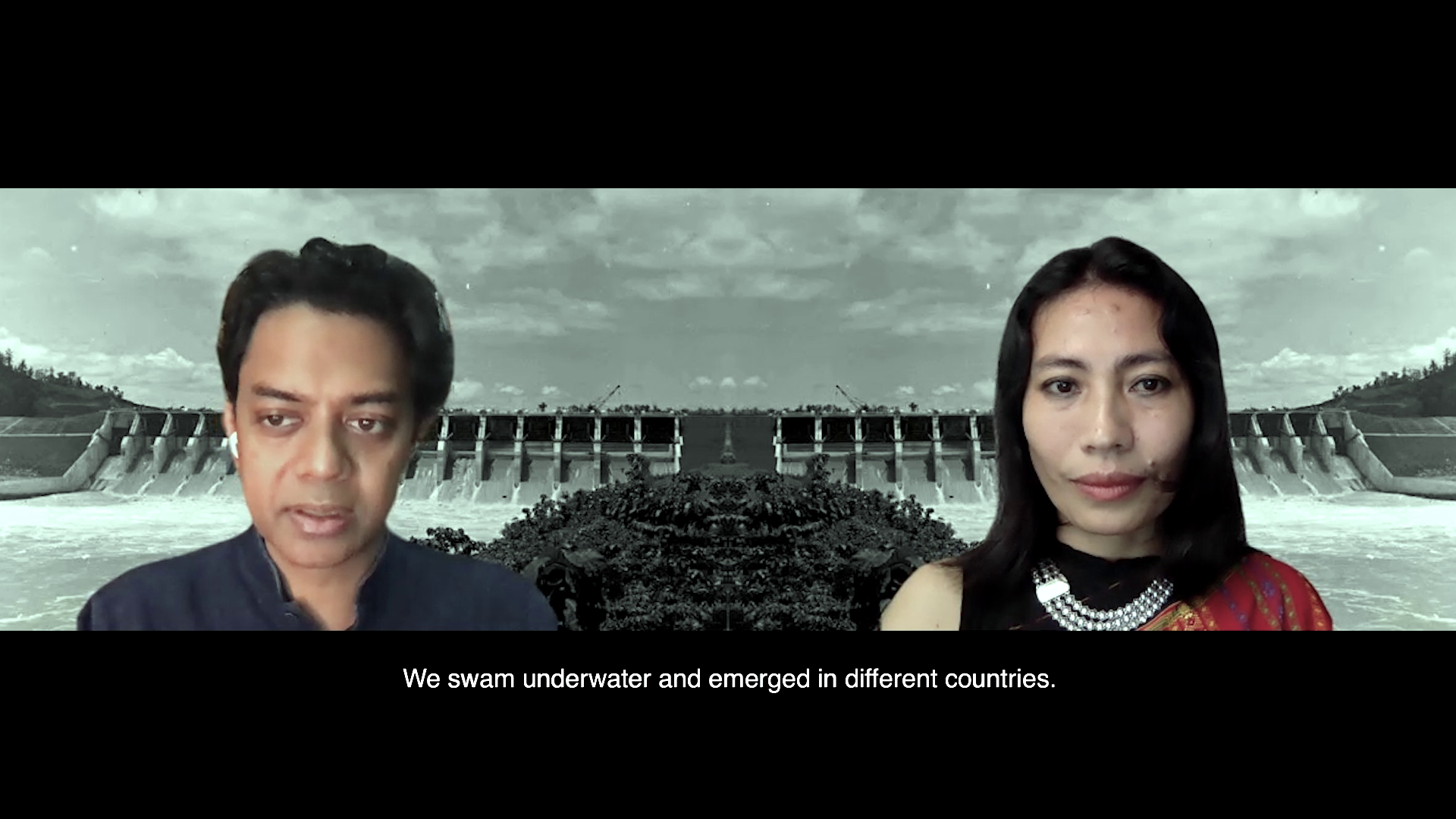 Autobiography of the Drowned* is an oral history of the Chakma Adivasi (indigenous) people from Bangladesh, performed as an online dialogue between Samari Chakma, in Sydney, Australia, and Naeem Mohaiemen, in Dhaka. The work raises questions about how the modern borders of formerly colonised nations have recreated patterns of oppression that entrapped Indigenous and minority groups, resulting in dispossession, persecution, and displacement from ancestral homelands. Capturing the story of Samari Chakma’s mother specifically, the performance speaks to the struggles of those who lost their land after the government dammed the Karnaphuli River at Kaptai in the early 1960s, flooding villages and farms. The format of the conversation, which is translated between the Chakma language and Bangla (the national language of Bangladesh), emphasises the narratives being related, urging the viewer to listen carefully to loss and pain experienced in the past, as well as the continued impact of these events on the community today. Created during the COVID-19 pandemic using a digital communication platform, the work not only suggests new ways of keeping stories alive even during times of isolation, but also points to the way in which dispersed members of disenfranchised communities, who have sought refuge in different parts of the world, become exiles left only with memories, at times with no prospects of ever returning home.

Samari Chakma was born in Khagrachari, Bangladesh. After her Masters in General History at Eden College, she received her LLB law degree from World University of Bangladesh and was certified as a lawyer in 2013. She was the first Chakma female lawyer enrolled to hear cases at the Bangladesh Supreme Court in 2017. Samari’s legal work is focused on providing legal assistance to rape victims, and victims of false cases, due to the ongoing political crisis of the Chittagong Hill Tracts. Samari was involved in the editing of two Hill Women’s Federation (HWF) publications – The Diary of Kalpana Chakma and Paharer Ruddho Kontho. In 2013 she founded, with comrades, the Comrade Rupak Chakma Memorial Trust, providing scholarships to 16 Pahari students. She is an editor at Thotkata.com and her writing has also been published in New Age, Survivable International, and Alal O Dulal. In 2018, she was a Bertha Global Exchange Fellow at the European Center for Constitutional and Human Rights, Berlin. Samari Chakma is currently in forced exile in Australia for her safety.