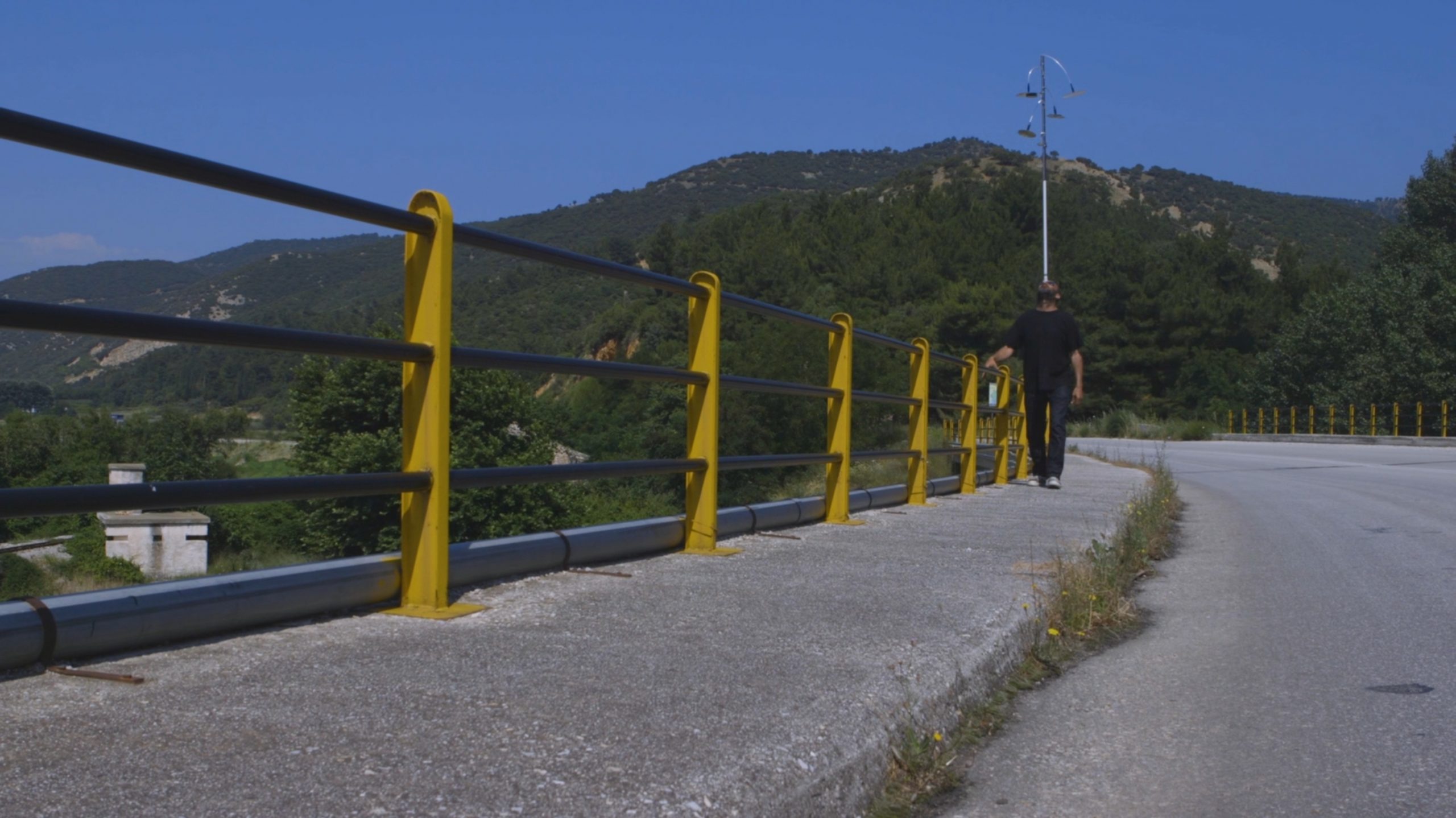 Pre-Image (Blind as the Mother Tongue)* revisits parts of the artist’s long and arduous journey, crossing Europe on foot from Iraqi Kurdistan to Germany. In this work, Hiwa K raises questions about how the specificity of place recedes, and a new relationship with the land emerges for those who need to flee their ancestral homelands and seek refuge elsewhere. While in a transitory state, the traveller develops a strong connection to the immediate unknown territory, as a way of adapting to the terrains traversed. After leaving the place of their birth, the crossing of land becomes the new norm for immigrants, the very condition they must inhabit—their feet, the artist suggests, become their new home. The voyage transforms migrants, who need to stretch themselves in order to survive, developing coping mechanisms which mirror their surroundings. The camera follows the artist as he walks across various landscapes, urban and natural, while carefully balancing a reflective contraption, almost a navigation prosthesis that extends his body, in a commentary on the vagaries of mass movement, often hazardous if not fatal—demonstrating that attentiveness to one’s precarious situation becomes as critical as the landscapes being negotiated.

Hiwa K was born in Kurdistan-Northern Iraq in 1975. His informal studies in his home town Sulaymaniyah were focused on European literature and philosophy, learnt from available books translated into Arabic. After moving to Europe in 2002, Hiwa K studied music as a pupil of the Flamenco master Paco Peña in Rotterdam, and subsequently settled in Germany. His works escape normative aesthetics but give a possibility of another vibration to vernacular forms, oral histories (Chicago Boys, 2010), modes of encounter (Cooking with Mama, 2006) and political situations (This lemon tastes of apple, 2011). The repository of his references consists of stories told by family members and friends, found situations as well as everyday forms that are the products of pragmatics and necessity. He continuously critiques the art education system and the professionalisation of art practice, as well as the myth of the individual artist. Many of his works have a strong collective and participatory dimension, and express the concept of obtaining knowledge from everyday experience rather than doctrine. Hiwa K participated in various group shows such as Manifesta 7, Trient (2008), La Triennale, Intense Proximity, Paris (2012), the “Edgware Road Project” at the Serpentine Gallery, London (2012), the Venice Biennale (2015) and documenta14, Kassel/Athens (2017). A selection of recent solo shows include the New Museum, NYC (2018), S.M.A.K., Ghent (2018), Kunstverein Hannover (2018), Jameel Arts Center Dubai (2020) and Museum Abteiberg (2021). In 2016 he received the Arnold Bode Prize and the Schering Stiftung Art Award and had a solo exhibition at KW, Berlin (2017). His “Chicago Boys” project is continuously hosted by international institutions.